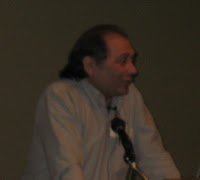 Jordin followed up his overview of the laser-launch industry with a report on LaserMotive, his laser-launch startup company.

LaserMotive is a Seattle based private company organized to compete with a NASA-sponsored Power Beaming competition. There is a two million dollar prize. Jordin talked about last year's competition. Jordin listed the people that are part of the LaserMotive team.

The contest had a four hundred foot crane. The device was suppose to be ten kilograms and climb the ribbon at least two meters a second. The ribbon would sway in the wind and twist, so tracking was an important issue for them.

Jordin went over many of the technical details they had to work out and some of problems they encountered at the contest.

They learned that it is important to test early and test often. Jordin said they tested features that never got used.