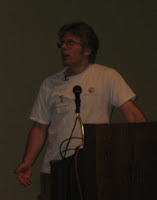 The videos were pretty cool!

For testing they strapped one of their rockets to a 50,000 pound crane and use the rocket to push the crane down a drag strip. There has been some problems with started and stopping, so they ran dozens of stops and starts to make sure the system issues have been fixed.


They have some contracts to bring in revenue, one is NASA, another is a business which has asked them to not talk about the work Armadillo is doing.

John believes they are just a couple million dollars away from having a workable system for taking people 100,000 feet up. He sees the space tourism market as having a great potential. John has recently put in a little more money to keep the business going.

They have learned a lot in building several vehicles in the last year.

Q: How much money has been spent?
A: Between three and four million over the last eight years.

Q: Plans for going to 100,000 feet?
A: Expect to lift relatively slowly, so the bulky modular approach should be OK.

Q: The half a million a year burn rate, does that include labor?
A: One person is being paid full time, others are getting a token payment.