An update on pets in our home.

Our youngest daughter decided that she likes snakes. She made this announcement on our trip in Virginia. I believe pets help children in a number of ways. Pets help children learn responsibility and children can learn empathy. (Initially I had written “Janine and I believe…” but Janine corrected me by saying that she “is willing to go along ….”)

I like to get pets from breeders, rather than a pet store. Pet stores are good for supplies, but I’ve found that breeders take better care of their animals. I did a google search for Corn Snake Breeder. After digging around a bit I found a national registry. We purchased a year old snake from The Corn Snake Pit.

Our youngest daughter is so happy. She likes to talk to the snake. She likes to hold it. She tells us stories about the snake. She’s been reading about snakes and she draws pictures of snakes. Originally she named it “Snaky.” Then she decided a more formal name of “Snaky Boy Scout.”

Having a pet is also educational. We’ve learned that snakes are solitary creatures and love to hide. I think our snake sleeps 23 hours a day. Our snake just shed his skin for the first time since we got him. The skin was very fragile and felt a bit like rice paper.

In doing research we found that Corn Snakes are the tamest and have a mild disposition. If you are interested in a pet snake, check out corn snakes.


Our youngest daughter holding her snake: 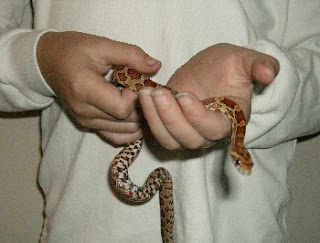 This is really good to know. My son also recently asked about having a snake as a pet. We have talked about frogs, turtles, and hermit crabs. But it sounds like the corn snake is a good choice. I'll just have to convince my wife, who hates snakes!

A rosy boa is also a good choice - it's what we have.

Be careful not to over-handle the snake, especially in the couple of days following a feeding (actually, you shouldn't handle them at all for 24 hours after feeding). It can stress them out and cause them to throw up their food.

Also, be sure that you have a separate container for feeding and/or do NOT feed by hand. If you do, the snake will associate people's hands with food and will become a biter (regardless of temperament).

Hopefully, your snake dealer told you that, but you never know. :)

Oh, and Phil - I don't care for snakes much either. I don't hold ours and my husband is fully in charge of its care. I was only willing to get a little one (under 3 feet). Maybe your wife will come around. :)

Thanks for participating in this week's Carnival of Family Life. It will be posted at midnight (PDT) at http://www.jhsiess.com!

Phil, I think Corn Snakes are a good choice.

Lisa, we do feed the snake in another location and leave him alone afterwards. Typically I'll feed him in the evening and then we won't handle him for 36 hours. The breeder was great. He covered a number of things like this.

We have some whirligig beetles as pets. They are cool! And it is really neat to watch them eat the insects we throw in for them!