Ugh, I’ve typed this up once already. I am down in the hotel lobby on one of the hotel computers. My wife is upstairs using our laptop. I spent about twenty minutes typing up a report on our day, and the hotel computer bluescreened on my.

In the morning I took my oldest and youngest and headed for the Metro. As an adult it is easy to forget just how many things we take for granted. My youngest daughter thought it was pretty cool that a piece of paper would open the gate at the subway station.

We rode the underground to the Federal Triangle stop. I mostly wanted to spend some time this morning doing something fun for the girls, and scout out how to use the Metro for when my brother showed up. We headed over to the Smithsonian American History Museum. Like all the Smithsonian Museums I’ve seen, it is huge. We spent an hour in there, and we could have spent a day.

We headed back to our hotel, arriving about none. My brother showed up about a half hour later. Everyone walked over to a Subway sandwich place for lunch. My second daughter was still feeling awful and pleaded that we let her go back to the hotel to rest. We walked back to the hotel, and my wife went upstairs with our poor sick daughter. The rest of us hiked on to the Metro station.

We rode back to Federal Triangle. First we walked over to The White House. The girls looked at it, and we talked some pictures. We are far enough back that it is hard to see much. There was some excitement, there was a dog running around on The White House lawn. Someone claimed it was the President’s dog, but it didn’t look like Barney or Miss Beazley. 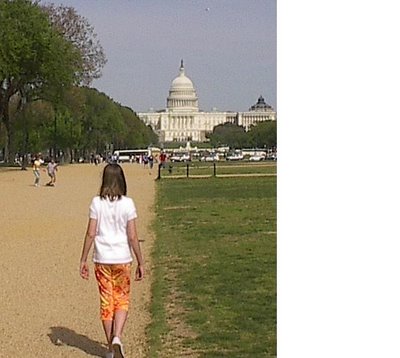 After The White House we walked over to the Smithsonian Museum of Natural History. We only saw the mammal exhibit and the dinosaur exhibit. All the girls were starting to feel exhausted. It was hot outside, getting close to 80 degrees. We must have gone through a gallon of water.

Next was the Smithsonian National Air and Space Museum. We got to see the first model of the USS Enterprise, used in the original TV show. I was surprised by how big it is. It is about ten feet long.

We headed back to the hotel. My brother and I left all six girls with my wife and we went out for pizza from Pizza Hut. My second daughter was feeling much better and even ate a slice of pizza.

It was a good day. The girls learned a little about the capital, and about history. And they are having a great time being together, and playing together.

Oh - Wash DC is one of my favorite places to visit! We took the girls there last year and all they can talk about is the talking trash cans at the food court in the Air and Space Museum. LOL!

The Museum of Natural History was a fave with our (then) 8 y/old. The (then) 4 y/old found it quite boring.