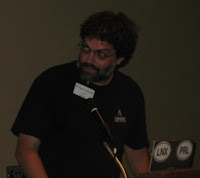 Ian Kluft is part of the Stratofox Aerospace Tracking and Recovery Team. They are an amateur group which helps in recovering lost rockets or lost balloons. Ian said balloons often go farther. Rockets which go up into space might drift 25 miles. Balloons have gone as far as 65 miles. Balloons can conduct experiments high up for a cheaper amount.

Stratofox stands for Stratospheric Fox Hunt. They want to be invited to all the cool rocket launches. They have found several lost rockets.

By recovering lost rockets they are helping to make the fledgling rocket industry more successful.

As Stratofox their first job was in 2003. They weren't given the radio frequency, but because they knew the terrain, they were able to track down the rocket.

In 2004 Stratofox recovered a rocket, and they also rescued two other people who were looking for the rocket.

They are looking for people who can contribute and have needed skills. They like ham radio operators, off road drivers, people with planes and so on.