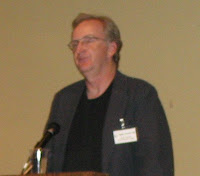 Henry Vanderbilt opened the conference by explaining why he started up Space Access. Getting mankind into space will help us avoid problems with limited resources. He wants a good future for his extended family.

Henry Spencer - on The Road Not Traveled, or, How To Return To The Moon (And How Not To)

Henry listed some considerations on why we should be focused on going back to the moon. He pointed out that we have hardly touched the surface of the moon. There is much more we can explore. We will need to plan for the long haul. We should fly frequently. It is better to have many small loads than a couple large loads. Henry warned that we need to plan for change. Our goals will change over time, and we won't be able to do everything we want at the start.

A minimum energy transfer from the Earth to the Moon is error sensitive. Apollo used a higher energy, partly to have a greater margin of safety. Interestingly, one of the reasons Apollo chose when to go to the moon was they wanted long shadows. This way as they landed they could see their shadow and visually gauge accurately how close they were while landing on the Moon.

Once you have a base on the Moon you can clear off the landing pad and provide landing beacons. This would allow you to land on the Moon at any time.

Henry explained that Warner von Braun helped the Apollo program by being super cautious. The original expectations was that the Saturn rocket would be about 75,000 pounds. Warner told his people that the launch would have to support at least 90,000 pounds. The rocket ended up being close to 100,000 pounds.

Henry worries that NASA doesn't have anyone now who is as cautious or has authority as von Braun did.

Having an assembly base in orbit gives you support facilities. NASA is reluctant to build in space. Henry had s sketch of an assembly shed. One important consideration is worrying about heat and cold. A shed can provide some protection.