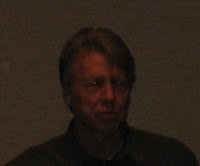 Leik Myrabo does research into beamed energy propulsion. Leik gave a similar talk last year. The idea is basic power production in a power plant is fairly cheap. Leik showed some videos. One video showed a flying helicopter powered by beamed microwave. This video was from 1964 and a helicopter flew for 10 hours. He showed several cool videos .

Many of the points he made today he made last year.

The Air Force is looking at putting small satellites into order. It takes about a Megawatt to put a kilogram into space.

Leik's vision is a collection of solar collections in orbit which beam power down to rocket ships. Once the infrastructure is in place the cost for a flight would be very low.