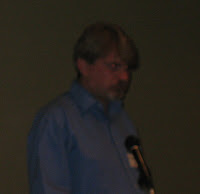 Dave Masten is going to report on what they have done over the last year and their goals for the next couple years.

Their long term goal is to development a full time transportation system. They are starting small, they want to first launch a hundred kilograms.

Masten Space got started in Silicon Valley and then moved to Mohave Dessert. They have done a ton of flights. He showed a video of XA-0.1. He said their safety systems worked, the engine shut off and the system was depressurized.

They have started developing a XA-0.2. It is a lunar lander contestant. They had trouble getting a tank. Their first supplier said they didn't know how to build the tank as designed. They have redesigned and simplified their design.


Dave had a new hire, Ben, show off their igniter. Ben showed a video. They have done a lot of tests and it seems to always work. Paul Breed warned about getting the copper too hot.

Someone asked how much the igniter cost, Ben said to talk with Michael, their marketing guy.

You can follow their progress at the Masten Space Blog.

Thanks for the write-up. I guess we could have gone a bit longer, but you can never tell how many people will have questions.