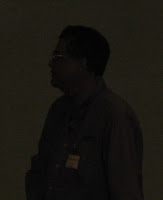 Dan DeLong, co-founder of XCOR and Chief Engineer, did a little song and dance while two other people from XCOR struggled to get the laptop up and running. While they worked on getting computer working Dan said that rockets were easy, computers were hard. He then had a tongue in cheek comment that he wasn't sure he wanted to ride on a rocket with software that was a direct descendent of something named Doom. John Carmack of Armadillo was a good sport.

XCOR currently has 25 people, five of them are named Mike.

Finally they got another laptop working!

Dan had a complex looking chart about how to eat meat. The chart started with looking for a mastodon. The point was once they feel like they have done enough analysis they move on. It is possible to over analysis a problem.

Dan talked about the history of XCOR. They have been involved in some government projects.

XCOR is building the rockets for the rocket races. Dan said that one of the requirements was that there was a bright colorful visible rocket plume.

Then Dan launched into information about the Lynx. Here is the press release. They have invested about seven million dollars. Here is a video of the Lynx:

The rocket will pull about two g's. Landing speed is about 90 knots, takeoff is about twice that.

When the price drops a bit I'll be tempted to buy a ticket. They plan to fly the Lynx twice a day. Dan reiterated the point that the only want to flew cheap is to fly frequently. The Mark I will be suborbital, the Mark II will go into space.

Q: Do you plan to sell rockets or run the a tourist business?
A: Initially expect to run the rides, but want to just sell rockets.

Q: How soon will the Mark II be available?
A: Twelve to eighteen months after the Mark I.

Q: Will you make more than one Mark I?
A: If there are customers, would love to make many of them.

Q: How big of a support team will be needed for a Mark II?
A: Trying real hard to keep the turn around time down, expecting about two hours. Think the ground team will be less than ten, maybe even half of that.

Q: Costs going forward?
A: Expecting another nine million dollars for the Mark I, and probably another twelve million for Mark II.

Q: What does a Mark I sell for?
A: Not clear Mark I if will be selling or owning the first Mark I. Not sure what it will sell for. Dan says that if sell to the government the rules and regulations make force the price up.